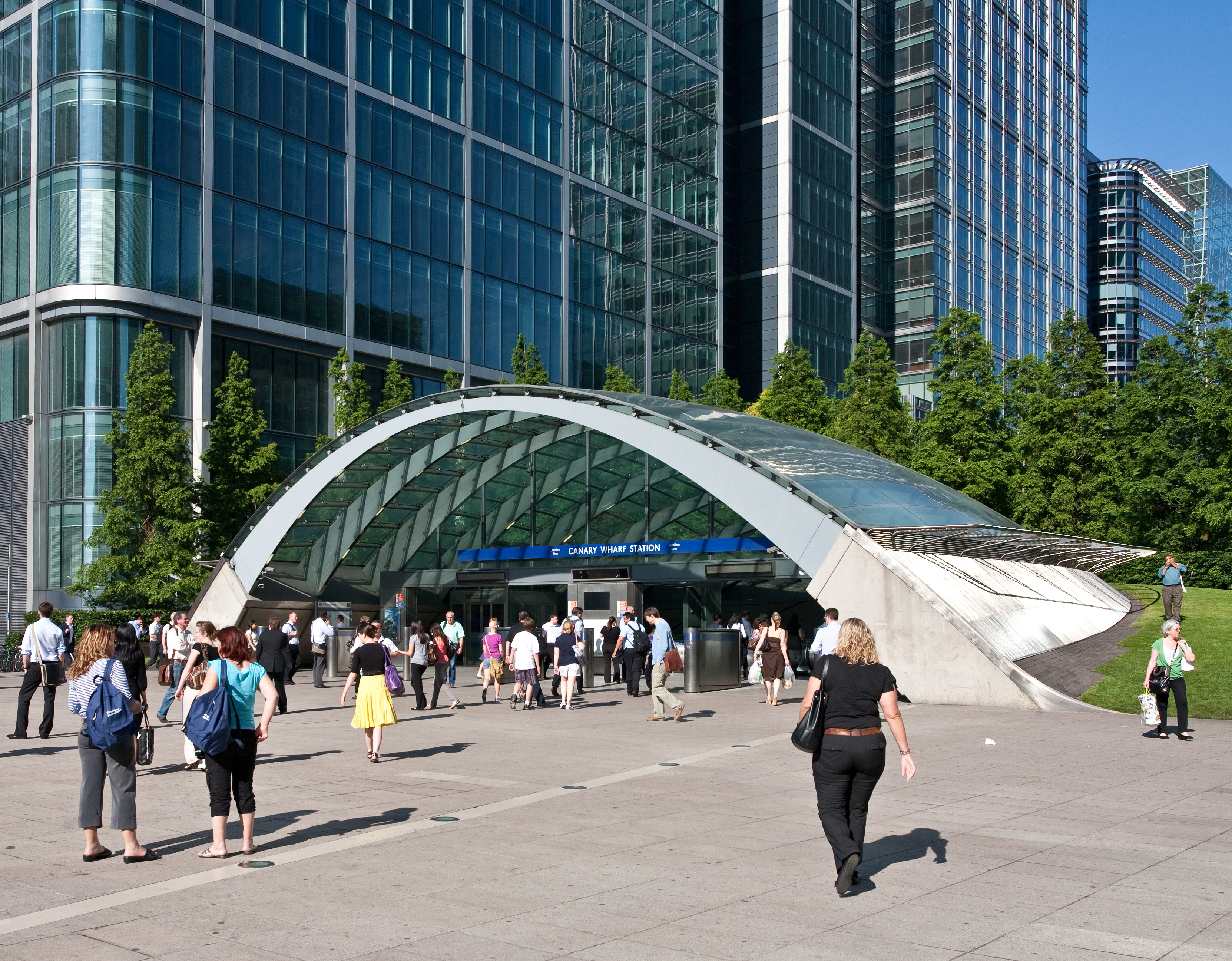 The Jubilee line was opened in 1979. The Metropolitan Railway opened some of the route in 1932, with this being transferred to the Bakerloo line in 1939.

The Jubilee line began as a branch on the Metropolitan Railway branch between Wembley Park and Stanmore in 1932, the branch proved very popular. When the railways where nationalised the branch was transferred to the Bakerloo line, where it remained for a few years. After the Second World War it was recognised that the London Underground network needed another line. In 1979, the Jubilee line opened; the line was extended to Stratford during the 1990s, and had recently been modernised.

The Metropolitan Railway branch between Wembley Park and Stanmore opened in 1932. The branch was designed absorb the commuter traffic from the new mainline suburban railways. The railway proved very popular and by the late 1930s the lines into Baker Street where quickly becoming overloaded, this was exasperated by a post-war disagreement between the City and West Ends of London.

To resolve the overloading at Baker Street, the Metropolitan Railway became an advocate to constructing an additional railway following the existing railway between Edgware Road and a point near Wilesden Green. A reconstruction of Edgware Road station allowed for 4 platforms to accommodate up-to 8-car trains, in preparation for this extension However nothing came of these proposals.

The London Transport Passenger Board (LTPB) absorbed the Metropolitan Railway on 1 June 1933 and this advocated another approach to resolving the overloading at Baker Street.

The proposal moved quickly and the Bakerloo line extension opened during 1939. The stations at Swiss Cottage and Lords where closed and never reopened because of the economic condition of the country following the Second World War.

Planning for the London Underground network after the Second World War, considered two additional railway routes to add to the network.

The second proposal: opened as the Victoria line in 1968.

The Times in 1965 published an article discussing the options to construct a railway after the completion of the Victoria line. This proposed a railway that would be called the Fleet line and operate between Baker Street, Bond Street, Trafalgar Square, Strand, Fleet Street, Ludgate Circus and Cannon Street continuing south-east. The project was called after the river Fleet, which the railway would cross at Ludgate Circus, the railway mostly followed the route of the river Tyburn in central London.

An extension was approved, however due to economic pressure and doubt on where the final destination would be, the extension was constructed in phases.

Phase 1: the section of the Bakerloo line running from Baker Street to Stanmore would be connected to a short 4km (2.5 mile) extension underneath central London to Charing Cross, this included two intermediate stations at Green Park and Bond Street.

Phase 2: extend the railway along the Fleet river, from Charing Cross to Aldwych, Ludgate Circus, Cannon Street and Frenchurch Street.

Phase 3: continue the extension under the river to Surrey Docks (Surrey Quays station on the Docklands Light Railway today) then on to the existing East London Line, taking the branches to New Gate and New Gate Cross. An extension would be completed from one of these stations to Lewisham.

Phase 4: continue the railway over the mainline suburban tracks to Addiscombe or Hayes

Construction on phase one of this extension began in 1971. This would reduce the pressure on the west end section of the Bakerloo line and allow for a more frequent service on the northern section of the line. A cross-platform interchange would be provided at Baker Street between the two lines, which was pioneered and proved successful on the Victoria line. Construction on this section went well and opened in 1979, the station Charing Cross on the District and Circle lines was renamed Embankment on the same day.

For the second phase of this section a test tunnel was constructed near New Cross however this part of London is nutritiously difficult to build in because the ground is waterlogged. This required a new method of construction, the Bentonite shield was used to construct the short 150m (492ft)tunnel and this proved successful. However this was never completed and the tunnel remains unused.

Another extention project was floated as an alternative to this extension in in the 1970s, this would entail constructing the railway along the river Thames instead The railway would run from Frenchurch Street via St Katherine's Dock calling at: Wapping, Surrey Docks North, Millwall (South Quay station on the Docklands Light Railway today), North Greenwich, Custom House, Silverton and Woolwich Arsenal. A new depot would be constructed at Beckton and the route became known as the River line. However this was deemed too extensive.

The name Jubilee line was first floated by Geoffrey Holliman, Sales Manager for London Transport Advertising, in 1975 while plans where under-way to introduce a London Transport Silver Jubilee bus fleet. However, this was rejected and deemed too costly to change the name of the railway. The project was subsequently renamed the Jubilee line because the Conservative party manifesto for the Greater London Council elections in 1977 named it as a pledge. The inital colour of the line was battleship grey, based from the naval definition of fleet, however the colour became lighter to represent H.R.H. Elizaberth II's Silver Jubilee and remains silver today.

The Jubilee line was officially opened by Prince Charles, the Price of Wales, on 30 April 1979; with passenger services starting in 1 May 1979.

A series of changes between 1970s and 1990s, such as a change of use for the land along the Docklands area, saw a series of proposals for an extension. A short extension had been completed in 1979, however in 1989 a study called he East London Rail Study found another extension to the Jubilee line was recommended.

A 16km (22.5 miles) extension from Green Park to Stratford was approved and received Royal Assent in March 1992. The project was started in December 1993 and had a budget of £3.5 billion, the project included constructing a 12.2km (7.7 mile) tunnel and a 3.5km (2.3 mile) railway on the surface. The project quickly became known as the Jubilee line Extension. The extension would include the construction of ten intermediate stations, all of which are state of the art architecture, have step free access and include passenger edge doors to prevent drafts, aid airflow and prevent people from falling or jumping onto the railway.

The project would be opened in three stages, with the final stage, connecting the railway at Green Park opening on 20 November 1999, along with the station at Southwark and the Jubilee station at Charring Cross closing. The last station to open on the line was Westminster on 22 December 1999.

This project also included replacing the existing 1983 stock, which was proving unreliable and troublesome.

The line was closed for five days from the 26 December 2005 to allow for the addition of one car per six-car train. This was after successful trials with four trains, however the passenger edge doors on the Jubilee line Extension would not allow both six and seven car trains to operate. The opportunity was also taken to upgrade the signalling system, this would enable a period where a full service could be increased, the full fleet of 63 seven-car trains was not required until a further signalling upgrade in the early 2000s. The line saw a capacity increase of 17%, the equivalent of 6000 passengers per hour when the works had been completed on 29 December 1995.

The line underwent a modernisation which concluded 26 June 2011. The entire railway was converted to be used with Automatic Train Operation (ATO), this would allow for a more frequent service allowing for a 33% increase in capacity and journey times being reduced by 22%. The modernisation included the replacement of tracks and the refurbishment of stations. Testing was undergone during 2006 along with the installation of the necessary equipment, to enable the modernisation to be completed the line had to be closed on weekends during 2009.

There are one depot on the Jubilee line, located at Stratford Market, where the trains are maintained; in addition to this there is a siding at Stanmore with reversing sidings located at West Hampstead, Willesden Green and Wembely Park.

Outside of Canary Wharf station (2009) 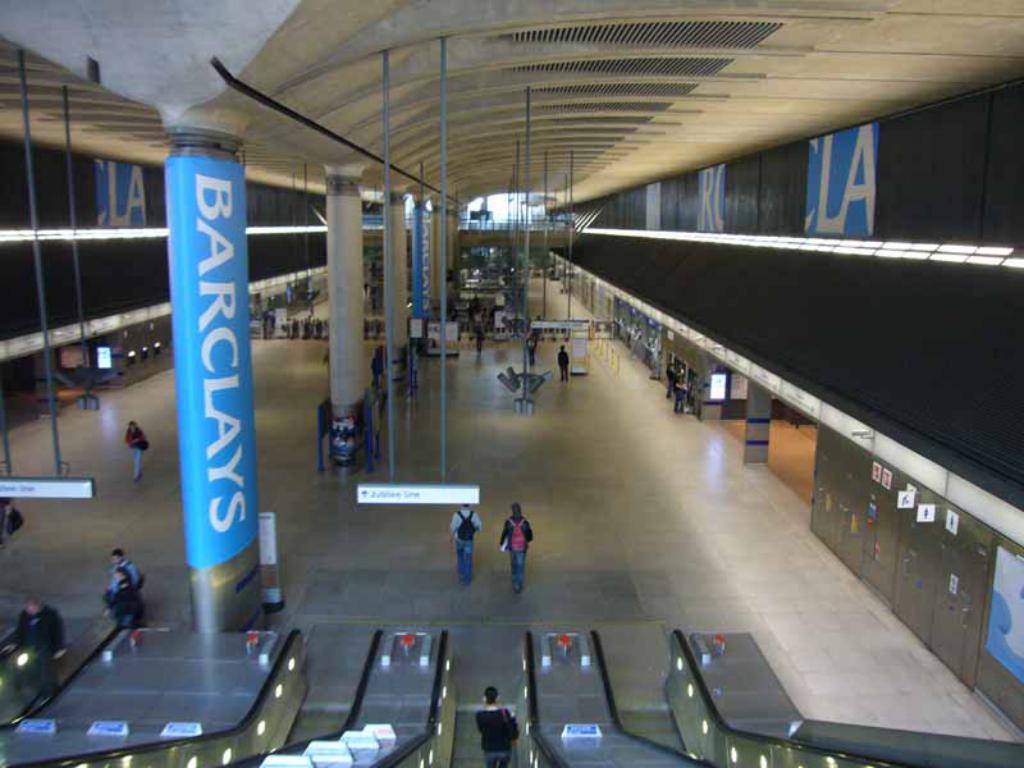 Inside of Canary Wharf station (2009)